…The Biden administration is drafting workplace safety rules that will require all businesses with 100 or more employees to mandate the vaccines for their employees or frequently test workers. That large employer rule would apply to about 80 million US workers, or two-thirds of all workers nationwide.

If the surveyed unvaccinated workers follow through on their threats to quit, it would lead to somewhere between 5% to 9% of workers leaving their jobs, depending upon what rules they face. 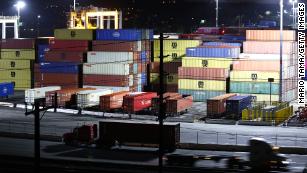 But the survey results come with a big caveat: Many unvaccinated workers who say they would quit may not follow through on that threat.

“What people say in a survey, and what they would do when faced with loss of a job can be two different things,” noted Liz Hamel, vice president and director of public opinion and survey research at KFF, in an interview earlier this month ahead of the latest survey.

Several major employers, including United Airlines and Tyson Foods, that have imposed vaccine mandates report nearly all their workers have complied with the rules.

Although 24% of adults in the survey said they knew someone who left their job over a vaccine mandate, only 5% of unvaccinated adults said they had actually quit over an employer vaccine mandate. Those who say they have quit represent 1% of US adults.

The survey, published in the October 2021 Vaccine Monitor Report, was conducted between October 14 to October 24 using phone interviews with more than 1,500 American adults.

The job market is especially difficult for employers to find and retain workers, with a near record number of job openings outnumbering the number of people looking for work, and people quitting jobs at a record pace, according to Labor Department data.

Losing employees who don’t want to be vaccinated or tested in a tight job market is one reason many employers were reluctant to imposed a mandate earlier this year. And it’s the reason many business groups, including the US Chamber of Commerce and the Business Roundtable, have voiced support for the federal regulations, since there was less chance of losing workers if other businesses have to follow the same rules.

Still. in recent weeks, a number of other business groups have voiced concerns that the mandates could add to the nation’s already struggling supply chain problems if unvaccinated workers start leaving their jobs. And a number of police and fire departments around the nation with vaccine mandates about to go into effect could soon face staffing shortages because of the large numbers of unvaccinated people among their ranks…