CDC has become very enamoured of the VAERS database for Covid shots.  This is very curious, because CDC used to claim this database was only good for identifying signals, and not for calculating the rates of adverse vaccine reactions.  I have previously cited the CDC’s own VAERS website, which says you cannot calculate adverse event rates using VAERS (because of the high but unknown extent of underreporting).

CDC created the V-Safe system as a new way to collect adverse event data on Covid vaccines.  V-safe has enrolled several million people receiving Covid vaccinations, who receive text messages asking them to report certain adverse events. For some reason, CDC does not collect the answers directly, but instead the reports go to the Oracle company.  Oracle aggregates the data and sends the results weekly to CDC.

Inexplicably, CDC instructed Oracle to identify serious adverse events in the reports it receives, and send them to VAERS. This causes the serious V-Safe reports to be doubly reported.  Taking data reported to one database and adding it to a different database seems to me to serve the purpose of confusing the statistical analysis of the data, and making it impossible to estimate how the reporting rate to VAERS compares with the actual occurrence rate of adverse events, and with previous VAERS reporting rates.

Past studies of VAERS underreporting (prior to the V-Safe additions) have estimated that only between 1 in 13 and 1 in 100 adverse events gets reported to the system. See:

But now CDC suddenly claims that “VAERS is the nation’s early warning system for vaccine safety,” according to slides 9 and 15 of CDC’s presentation.  The identical slide seems to have been repeated for emphasis in the presentation to CDC’s Advisory Committee for Immunization Practices by CDC’s Tom Shimabukuro on June 23.

While VAERS is useful, but should not be used to calculate adverse event rates, CDC has a number of other databases that have statistical validity, which VAERS lacks.  In fact, CDC claimed to be using many such databases to assess the safety of Covid vaccines.  Here is a list that CDC’s Immunization Center Director presented last December: 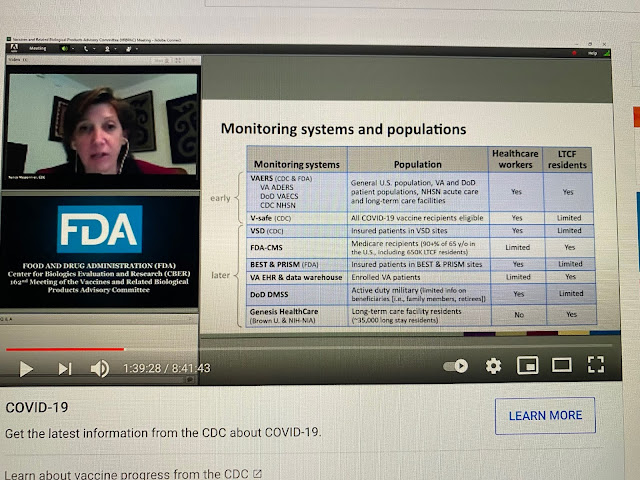 If the CDC seriously wanted to assess the actual rate of myocarditis following Covid vaccinations, an excellent place to start would be the military’s Defense Medical Surveillance System (DMSS).  It is listed as one of the surveillance systems CDC would be using in the graphic above.

Every military servicemember’s vaccinations, outpatient visits and hospitalizations are included in this database, so if CDC told us what the DMSS data showed, there would be no need for guesswork regarding the actual rates of adverse events in US soldiers. But instead, CDC keeps these more valid data hidden, and falls back on VAERS, improperly calculating “observed vs expected rates” from a database with an acknowledged huge rate of underreporting. The only explanation for why this is done is to reduce the apparent adverse event rate.

The younger you are, the more likely you are to get myocarditis after a Covid shot.

And then there is the fact that if you are going to compare the expected rate with the observed rate of myocarditis post-vaccination, you need to be using comparable groups to compare the rates.  But the VAERS database is not a database that can be used quantitatively, since we do not know much about the characteristics of the VAERS-reporting population.

Finally, there is a backload of VAERS reports that have not been input into the system.  Some say the backload is up to 2 months of data–we really do not know how much missing data there is.

Now, I really don’t want to use VAERS (+/- V-Safe) data to come up with these estimates.  I would much prefer to give you real numbers. But CDC is hiding the real numbers from all those databases they listed above, and pretending that VAERS, V-Safe and a tiny cohort from the VSD is all they’ve got.

Hiding the actual adverse event rates while using psychological, financial, educational and other methods to pressure people into taking an experimental vaccine ought to be a crime.  It probably is a crime, and the US public health agencies are co-conspirators.

UPDATE June 29:  I just listened to Dr. Robert Malone’s interview with Del Bigtree last week.  Malone is the MD, PhD who first began using mRNA technology in vaccines.  He pointed out that myocarditis may be causing heart attacks in older age groups… where the diagnosis may be incorrectly attributed to coronary artery disease, rather than to inflammation resulting from a Covid-19 vaccine.

It is important to remember that smallpox vaccinations were stopped in the US decades ago because of high adverse reaction rates.  Especially cardiac reactions.  Myo/pericarditis as a consequence of vaccination is not new.  It has been observed for many decades.

There have been no natural smallpox cases in the world since 1977.

But the smallpox vaccinations were continued for the military, where servicemembers continued to have high adverse reaction rates.  Malone referenced a 2015 paper written by military physicians (the first 3 authors are people whose work I respect) documenting high rates (214 times the baseline rate) of myocarditis-pericarditis in those being vaccinated.

Below is the abstract from this paper. And here is one of at least 8 reports on smallpox vaccine and the resulting cardiac complications, published by CDC, in its 2003 Morbidity and Mortality Weekly Reports.

What CDC appears to have learned from the 2003 smallpox program is that it needed to cover up the severe adverse reactions, in order to keep up the vaccinations.

Purpose: The study’s primary objective was to determine the prospective incidence of new onset cardiac symptoms, clinical and possible subclinical MP in temporal association with immunization.

Results: New onset chest pain, dyspnea, and/or palpitations occurred in 10.6% of SPX-vaccinees and 2.6% of TIV-vaccinees within 30 days of immunization (relative risk (RR) 4.0, 95% CI: 1.7-9.3). Among the 1081 SPX-vaccinees with complete follow-up, 4 Caucasian males were diagnosed with probable myocarditis and 1 female with suspected pericarditis. This indicates a post-SPX incidence rate more than 200-times higher than the pre-SPX background population surveillance rate of myocarditis/pericarditis (RR 214, 95% CI 65-558). Additionally, 31 SPX-vaccinees without specific cardiac symptoms were found to have over 2-fold increases in cTnT (>99th percentile) from baseline (pre-SPX) during the window of risk for clinical myocarditis/pericarditis and meeting a proposed case definition for possible subclinical myocarditis. This rate is 60-times higher than the incidence rate of overt clinical cases. No clinical or possible subclinical myocarditis cases were identified in the TIV-vaccinated group.