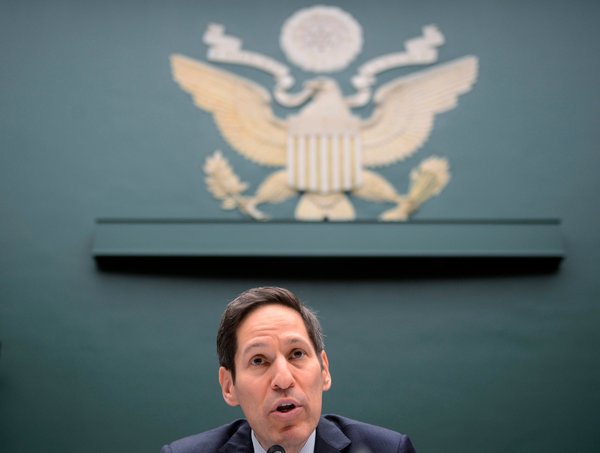 Dr. Thomas R. Frieden, director of the Centers for Disease Control and Prevention, is investigating a laboratory mistake that has potentially exposed workers to the Ebola virus.

A laboratory mistake at the Centers for Disease Control and
Prevention may have exposed a technician to the deadly Ebola virus, federal
officials said on Wednesday. The technician will be monitored for signs of
infection for 21 days, the incubation period of the disease. A small number of
other employees, fewer than a dozen, who entered a lab where the mistake
occurred will also be assessed for exposure.

The error occurred on Monday when a high-security lab at the
C.D.C. in Atlanta, working with Ebola virus from the epidemic in West Africa,
sent samples that should have been inactivated to another C.D.C. laboratory,
which was down the hall. But the lab sent out the wrong samples, ones that had
not been inactivated and that may have contained the live virus. The second lab
was not equipped to handle the live virus. The technician who worked with the
samples wore gloves and a gown, but no mask, and may have been exposed.

The error was discovered on Tuesday.

The accident is especially troubling because dangerous
samples of anthrax and flu were mishandled at the C.D.C. just months ago,
eroding confidence in an agency that has long been one of the most respected
scientific research centers in the world. The C.D.C. promised last summer to
improve its safety procedures…

The Keystone Kops at CDC are at it again, playing scientist badly.  CDC has promised Congress to get this right so many times, yet nothing ever seems to change. CDC staff have proven again that they are incapable of using the level of care required to handle life-threatening pathogens, and they are furthermore incapable of applying the supervision required to ensure mistakes like this don’t happen.

The scientists who worked adequately with E.coli or influenza viruses last month cannot be assigned Ebola this month.  It doesn’t work.  And CDC hasn’t figured this out.


I wrote a post here in July, pointing out that CDC scientists working on anthrax did not know the difference between an anthrax spore and an anthrax vegetative cell. One is a potential weapon, very difficult to destroy, while the other is an easily killed bacterium unless and until it sporulates. Scientists designed and used a procedure to kill spores that had never been tested on spores and only worked on vegetative cells, contaminating several labs and about 80 people with live spores. CDC’s spinmeisters got to work on this mistake, and did their utmost to obscure the difference.


Investigation of the incident by CDC confirmed that the people involved were unfamiliar with the relevant peer-reviewed anthrax literature. Did not use SOPs. Failed to report the incident in a timely manner. That is a polite way of saying the scientists involved were ignorant, unprofessional, reckless and lazy.


Mike Stobbe at the AP already pointed out this was a “bumpy” year for Public Health. His “lowlights” from 2014 included this one:

—In January, a CDC lab scientist in Atlanta accidently mixed
a deadly strain of bird flu with a tamer strain, and the mix was later sent to
unaware workers at two other labs. In June, another CDC lab failed to kill
anthrax samples before sending them to two labs with fewer safeguards for
containing dangerous germs. No one got sick from either incident, fortunately.
The anthrax lab director resigned and administrative action was taken against
“a few” other employees, a CDC spokesman said.

As the NYT notes,

Under harsh questioning from members of Congress [in July 2014], Dr. Frieden admitted that the errors at C.D.C. labs had not been isolated mishaps, but rather part of a broad pattern of unsafe practices. He called one of the episodes a “tipping point” that had forced agency officials to realize they needed to take action.

Money is definitely not the issue.  According to the December 13 Economist, the CDC “spent nearly $7 billion this year alone.”


Back in August, USA Today investigated (and I blogged on) over 1000 similar errors in the handling of dangerous pathogens over 5 years, at CDC and elsewhere.  The reporters said much of the information has been hidden, but that citizens have reason to be concerned about safety practices at CDC. USA Today also reported on this subject here, detailing safety problems identified by the DHHS Inspector General.


Reuters pointed out in July 2014 that Frieden had promised Congress in 2012 to appoint a new safety head at CDC who would report directly to him, in a piece titled, “Before anthrax mishap, CDC made similar lab safety pledges: lawmaker.”


When Frieden was asked by the committee in 2014 who that safety head was, he was unable to answer. Turned out, he was the guy sitting next to Frieden at the hearing, feeding him answers.

Bottom line: It seems that it is impossible to ensure safe practices at CDC. Frieden should be fired, and the select agent labs at CDC need to be closed. The employees have proven they do not know what they are doing, and CDC has proven it cannot supervise them adequately. CDC’s select agent researchers, and supervisors, need to be doing something else that does not endanger others.