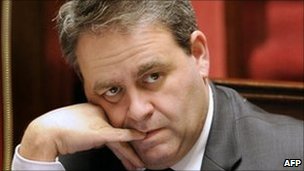 French Health Minister Xavier Bertrand has promised a complete revamp of the country’s medical regulatory system.He was speaking after an official report said a diabetes drug which caused up to 2,000 deaths should have been banned 10 years earlier.

The drug – known as Mediator – should have been banned as early as 1999, when it began to emerge that it could cause heart disease, the report said.  Several other European countries and the US then withdrew it.

But Mediator remained on sale in France for another 10 years.  Between 500 and 2,000 people in France are believed to have died because of its side effects.  It was developed to treat diabetics but millions of people took it simply to lose weight.

The report by a government agency, the Social Affairs Inspectorate, said it was incomprehensible that the authorities had failed to act sooner.  Mr Bertrand said it was now his duty to rebuild the regulatory system to protect the public.  His statement is being seen as an admission that one of the biggest medical scandals in France in recent years may not be an isolated case.

The affair has become politicised as the pharmaceutical company which manufactured the drug, Servier, reportedly had high-level political connections.

The health minister himself has been implicated by French media reports alleging that two of his advisors had previously worked for the company.