From an exclusive interview with the WSJ:

BAGHDAD—Prime Minister Nouri al-Maliki ruled out the presence of any U.S. troops in Iraq after the end of 2011, saying his new government and the country’s security forces were capable of confronting any remaining threats to Iraq’s security, sovereignty and unity. 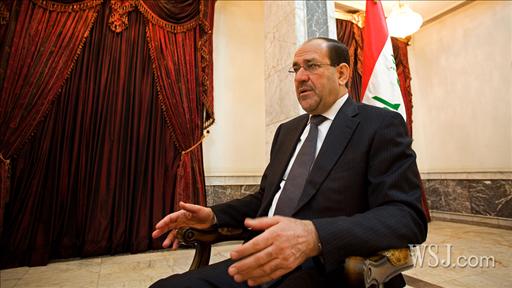 Prime Minister Nouri al-Maliki sat down for an exclusive conversation with The Wall Street Journal’s Sam Dagher. Here are some excerpts.

Mr. Maliki spoke with The Wall Street Journal in a two-hour interview, his first since Iraq ended nine months of stalemate and seated a new government after an inconclusive election, allowing Mr. Maliki to begin a second term as premier.
A majority of Iraqis—and some Iraqi and U.S. officials—have assumed the U.S. troop presence would eventually be extended, especially after the long government limbo. But Mr. Maliki was eager to draw a line in his most definitive remarks on the subject. “The last American soldier will leave Iraq” as agreed, he said, speaking at his office in a leafy section of Baghdad’s protected Green Zone. “This agreement is not subject to extension, not subject to alteration. It is sealed.”