Joni Mitchell jumped on the Neil Young (“I’m packing up my toys and going home”) bandwagon, and she too is obtaining inordinate free publicity as a result.  Especially from my favorite CIA rag, the Guardian.

What did Joni say?

“Irresponsible people are spreading lies that are costing people their lives,” she said in a message posted on her website. “I stand in solidarity with Neil Young and the global scientific and medical communities on this issue.”

What did Peter Daszak say? Peter is CEO of EcoHealth Alliance, a CIA-connected money-laundering firm that gets paid by at least 5 federal agencies to collect and design new biowarfare viruses in 31 countries. Peter was the secret author of the Lancet Correspondence, February 2020, which was written to kill off the lab origin hypothesis by painting it as a conspiracy theory:

“We sign this statement in solidarity with all scientists and health professionals in China who continue to save lives and protect global health… Conspiracy theories do nothing but create fear, rumours, and prejudice…”

Pay close attention to the words they chose and the images these words were meant to convey.  Could Joni and Peter have aligned so closely by accident?  Un unh.  Did someone nudge a couple of Canadian rockers to trash talk Joe Rogan just when Canada’s fearsome truckers were trying to save the world from a totalitarian takeover by encircling Ottawa, on this very day?  Trying to grab a bite of the Canadian news cycle, using a couple of elderly musicians who maybe took a few hits too many to craft their own statements?

I suspect Peter and Joni are backed by the same PR firm or publicist.  Could it be Edelman?

What did Joni and Peter (or their handlers) do to demand they be taken seriously, to demean those who disagreed, and craft a position that no one could take issue with?  They didn’t actually say very much.  Instead, they elicited the following images.  They used very specially chosen code words, which I bolded.

1.  Grabbed the “saving lives” high road.  We are with those who save lives.  The Others cost lives.

2.  Grabbed a spot in solidarity with the overwhelming majority of experts and good guys, globally.

3.  We are the truth-tellers.  The Others tell lies and spread conspiracy theories

Now that I have shown you how this is done, there is no excuse to ever fall for this again, no matter which blonde or bald guy comes up with this balderdash.  Sorry to harp on this, but I think it is a very important lesson.

By the way, what has Neil Young been smokin? He claims to be against censorship and in favor of free speech.  Hello? Someone send him a dictionary please.  Can he really be this clueless?

In a statement on his website on Friday, Young reiterated his objections to Rogan’s podcast and took a swipe at Spotify’s sound quality. He also said he supported free speech.

“I support free speech. I have never been in favor of censorship,” it said. “Private companies have the right to choose what they profit from, just as I can choose not to have my music support a platform that disseminates harmful information.” 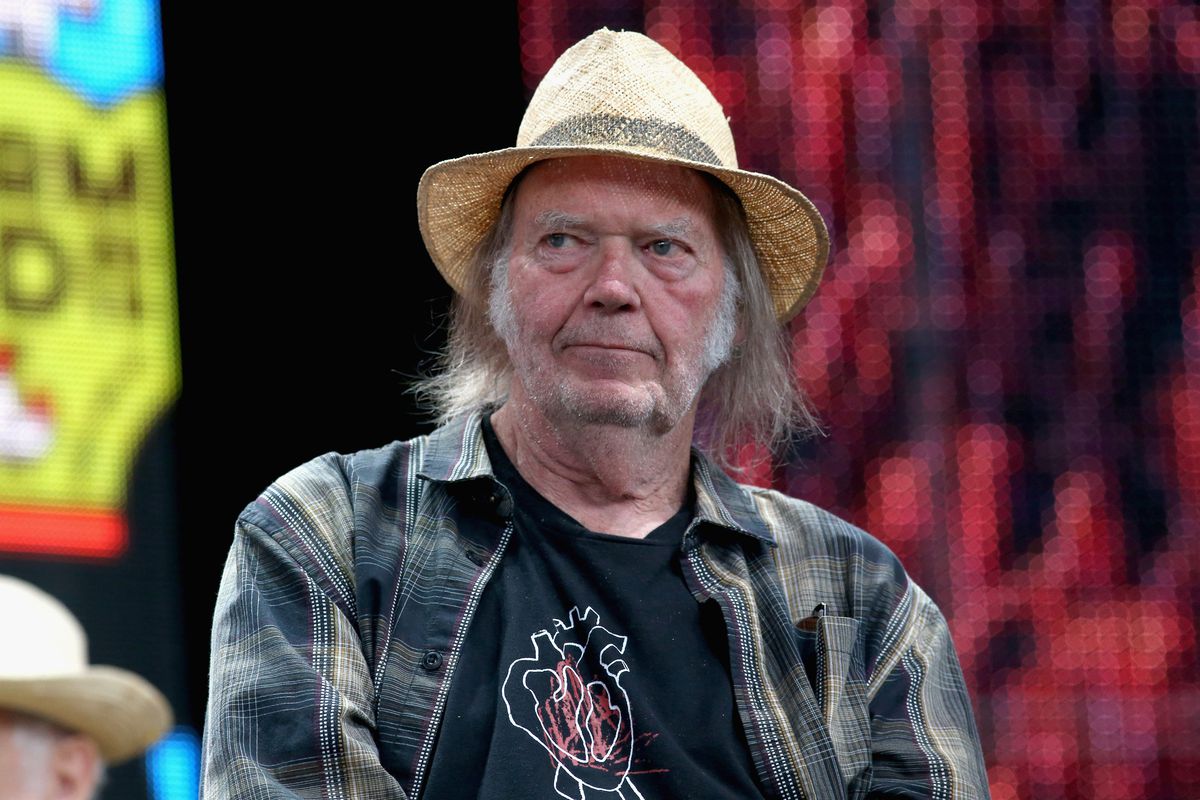 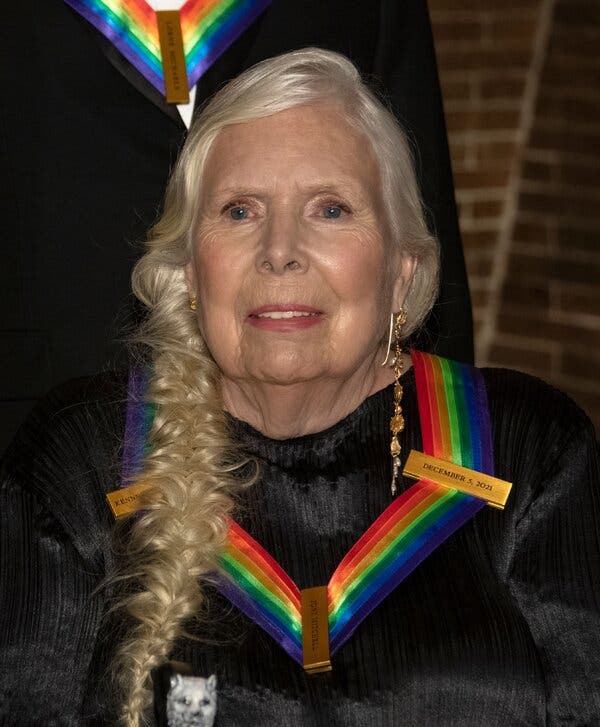 Read about “Lookout Mountain” and other things in “Weird Scenes Inside The Canyon: Laurel Canyon, Covert Ops & The Dark Heart Of The Hippie Dream” by David McGowan. The musical groups who were promoted back in the 60s were far more “interesting” than we ever imagined.

Brilliant. I had been too busy cringeing at these two embarrassing navel-gazers to have made the Canada connections. One would think that, as lifelong wordsmiths — and purported anti-establishment rebels back in the day — Young and Mitchell would recoil from pc code words. I guess nothing has really changed, though; then as now, they were along for the easy ride, not the difficult one. Another item for “you can’t make this stuff up”.

These people are all connected to the military. Check out David McGowen’s fantastic writing on Laurel Canyon.

this characters have too much money now to actually care, think, do research
they are part of the .001% elite

The rainbow around her neck. It predates the Covid-Crisis as a PR tool, and also has some Ultra-Zionist symbolic significance, as well, in the relationship of ‘Noahide/Noachide’ legislation via special interest strong-arming (recently in the U.N., but also within ‘Social Justice’ ethics, in between the lines of ‘Communitarian’ Crypto-Kibbutz ‘Impact Finance.’ Sounds like a lot of over-the-top stuff, but this is the landscape. Two examples here that show exactly what this is (given you do genuinely care)- strong, long-term historical relationships as well to Banking, which I’m sure you’ve noticed has been using the debt-vacuum created by Covid as a leveraging tool for CBDC/ESGs, among other infrastructural enforcement.

2.) The Noahide law/legislation, discussed with a PHD in Political Science/Philosophy, and a former IDF soldier here, which is primarily symbolized by the ‘Rainbow following the Flood’ in which religious Jews believe certain ‘universal’ (global) laws must be kept by everyone, especially non-Jews.
https://www.youtube.com/watch?v=yGKpehZy78Q

3.) Then you can go back, and see the history- as mentioned in shorthand in the first article- going back to the very foundations of Usury and the Church itself, certain transgressions, dispensations made-
https://odysee.com/@mentealt:1/Michael-Hoffman-on-the-Doctrine-of-Usury-in-Catholic-History:4

6.) Most know it as being associated with the so-called LGBTQIA activist NGOs, which are within the spectrum of Democracy Alliance and Soros Dynasty. A ton of conflicts of interest here, notably the David H. Price ‘Dual Use Anthropology’ weaponization of sexuality and gender psychology as a tool for regime change in this regard, namely against Christians/Catholics in the West, and Muslims abroad (as well as some domestically who are more traditional, even though they pretend otherwise). This is easily looked up and found. The entire ‘BDS’ movement was swept-up and co-opted by this financial sphere, now being ‘outlawed’ in many US states- stomping out first amendment rights- while using the movement as a pro-gay subversion operation against Islam abroad, as mentioned in the second link. So people see this LGBTQIA ‘movement’ as one thing, when it is in fact a bought, weaponized ‘dual use’ operation, ironically wearing the ‘Noachide’ symbol as its flag.
https://www.winterwatch.net/2021/12/dcleaks-releases-soros-scheming-documents/

So there is a sort of economic racket going on, which is disingenuous, between the upper echelons of ‘Progressive’ activism, within the Soros-Dark-Money sphere, crossing over into this more traditional, neoconservative sphere, which play off of one another. Soros himself is/was a member of aggressive neoliberals who associated with Hyperlibertarians in Silicon Valley for decades, so the crossover is not really ‘new’ except in this weaponized form. Soros and Koch have even recently built an NGO together, and the ‘Open Society’ matrix has very much served the interests of those who launder money abroad. This is the ‘Who’ of the pressure applied on these artists- a massive criminal syndicate hellbent on controlling international laundering and narcotics, weapons rackets. The religious element is mainly just for control and extra protection, along with divisive PR when needed (for proxy conflict).

One element of proof of this- all of these very same artists were universally falling in line during the BLM rioting as well. They’ve all been a part of that preceding CV. With the elastic, careless application of National Security Surveillance onto your average, even poor citizenry, you’ve got what amounts to a giant shakedown racket, with the rent-seeking economy forcing these artists, small businesses, etc into illicit economies to survive. That’s extortion. They don’t want to be extorted, may be threats as well, then they do what they’re told. I don’t believe many, if not a majority, of these people would do any of this if it was just financial incentive. They are already mega-rich, and the veterans of industry, like Mitchell, Young, etc, can retire on tens of millions easy, just sitting on greatest hits. No need for them to disrupt their relaxation and plunge into the fray at 70- but they ALL are. ALL of them- just like they did with the riots. And if you look at sites like Allmusic, Metacritic- this uniformity extends into the indie, lower-level, less popular music/entertainment as well. Just on a game theoretic, logical-deductive standpoint, knowing how humans work on groups levels, especially when you’re literally talking hundreds of millions, you’d literally HAVE TO be extorting and threatening many, if not most, of these people to get them to do all of this. There is just simply no motive, and plenty of history with dissent, disagreement, the finds in something like Ash-Conformity, which show that it’s really not hard to break some monolithic groupthink in a large crowd of uncomfortable people. They’d at least allow people their own medical choice, in spite of their opinions- it would even fall in with their own ‘Google A.I.’ profiles, I’m sure, with their Free-Love-liberalism, Pro-choice lifestyle they’ve always had/promoted. The only way is to have something, a threat, which is being used to destroy all of their lives, with a very high cost in risk-benefit-analysis. They’re being violently gagged by the same group, I assume, which threatened ‘collateral’ during the 2008 crisis. That group threatens their bosses, who work with crime syndicates/intelligence, and it trickles down.

Why would anyone care what two vintage musicians have to say, anyway, especially when their narrative is black, white and simplistic. “We are the truth-tellers. The OTHERS tell lies and spread conspiracy theories”. Are you certain of that? Did YOU actually think? Have you done any comparative research before opening your mouths and sharing YOUR OPINIONS?
Joe Rogan does not try to tell his audience what they should think, he promotes independent thought and individual exploration of “fact”. If you take notice, you just might see that often the folks he interviews are or have recently been TOP EXPERTS in their respective fields who have been silenced. Hmmm, seems Meryl is one of them. How can anyone not ask themselves WHY?
Don’t cave in, Joe, and don’t you either, Meryl!