ALL of Canada Has Joined The Convoy, Except Trudeau. Accuses Freedom Convoy 2022 of Propagating Hatred, Racism and Violence

https://www.globalresearch.ca/video-justin-trudeau-accuses-freedom-convoy-2022-of-propagating-hatred-racism-and-violence/5768805
Above, Justin Trudeau meeting in Ottawa with the head of Ukraine’s Neo-Nazi party, the gentleman he is closest to, Andreiy Parubiy.

According to Justin Trudeau:

Prime Minister Justin Trudeau says “hate speech and racist symbols must not be tolerated in Canada.”

Trudeau referred to swastikas intimating that the organizers are supportive of Neo-Nazi symbols. (There was one swastika event in Ottawa coupled with a Confederate flag, confirmed by the Times of Israel).

What Trudeau, however, fails to mention is that his government is supporting Ukraine’s National Guard which is controlled by Neo-Nazi elements.

When will Canadians say, “Let’s go, Justin”?  How can they bear him even one more day?  Send him back to drama class. 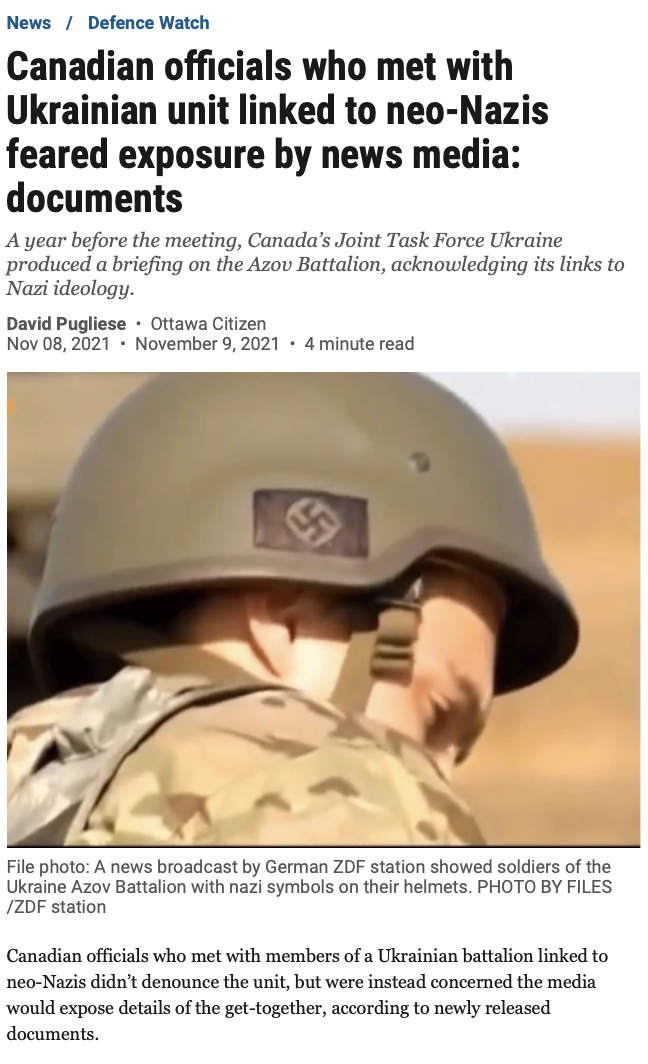 just waiting for that man to go down. He is terrible.

The confederate flag carrier was chased away immediately and the swastika was seen at a distance, away from the protesters, apparently left unattended.

I hope the US get royalties on this production.

The Plan To Tag Us for the New World Order Slave System Understanding Deep Politics
https://www.lewrockwell.com/2022/01/joseph-mercola/the-plan-to-tag-us-for-the-new-world-order-slave-system/

A Self-Fulfilling Prophecy: Systemic Collapse and Pandemic Simulation
“We’re looking at a form of corporate tyranny previously unseen in America.”

Pam and Russ Martens of Wall Street on Parade have reported on the mega giant bank bailouts during the 4th quarter of 2019, just months before COVID was declared to be a pandemic giving further evidence from a series of events at the end of 2019 that the war on the virus that has enslaved the entire world, was all planned long in advance by the Globalists.

And the New York Fed & its unlimited ability to electronically print money.

Donald Trump, who was the President of the United States when all these banks were creating money to give to themselves at the end of 2019

Trump has always been a person where you need to ignore what comes out of his mouth, and actually watch what he does.

Again, we seem to be caught within a self-fulfilling prophecy especially if, as Nobel laureate Luc Montagnier and many others have intimated, variants, however mild, are the consequence of aggressive mass vaccination campaigns

America is run by criminals. They just pulled the greatest coup in probably the history of the human race, without firing a single shot or sending in a single soldier.

Printed themselves $4.5 trillion
It did not start with the outbreak of COVID in 2020, but it started in the Fall of 2019 where they enriched themselves with the capital they needed to pull off this coup, and then their puppet politician, fellow Wall Street Billionaire Donald Trump, followed their directions to implement Operation Warp Speed to get the gene altering injections produced and injected into the population

How Big Capital uses the Pandemic to bailout and delay capitalist collapse without hyperinflation. And in the process to grab mega profits and permanent citizen control by the elite.

Again, the message is unequivocal “An unprecedented response is needed when monetary policy is exhausted and fiscal policy alone is not enough.

22-24 Aug 2019 G7 central bankers meet in Jackson Hole, Wyoming, to discuss BlackRock’s paper along with urgent measures to prevent the looming meltdown. In the prescient words of James Bullard, President of the St Louis Federal Reserve “We just have to stop thinking that next year things are going to be normal.”