We all knew this was coming. In order to justify the forced vaccination of children, the powers that be would somehow have to overturn 15 months of observations that COVID is less a threat to children than the flu and that unvaccinated children are less at risk than vaccinated adults (100 times less at risk than seniors), even if we are to believe Pfizer’s efficacy data.

“CDC director reports spike in teen hospitalizations, urges parents to vaccinate kids over 12,” was the headline at the Hill on Friday, reporting on the CDC’s new study of hospitalizations. Naturally, it caught my attention because we all know that hospitalizations among all age groups have been plummeting to record lows across the country in recent weeks. It turns out that along with its Morbidity and Mortality Weekly Report (MMWR), the CDC published a “study” purporting to show an increase in hospitalizations among 12- to 17-year-olds, with one-third of them being in the ICU and 5% of them being placed on ventilators.

CDC Director Rochelle Walensky was ready to pounce. “I am deeply concerned by the numbers of hospitalized adolescents and saddened to see the number of adolescents who required treatment in intensive care units or mechanical ventilation,” said Walensky in a statement.


Of course, the solution is the great experimental gene therapy. “Until they are fully vaccinated, adolescents should continue to wear masks and take precautions when around other [sic] who are not vaccinated to protect themselves, and their family, friends, and community,” Walensky stated.

CNN dutifully echoed the false data and the premise it engenders without investigating it.

Most of that mini increase (after the major winter spread) was due to the final spring spread in the northeast and upper Midwest. Based on the CDC’s headlines, one would think that childhood hospitalizations are spreading now and that they are rising relative to other age groups. In reality, they have plummeted and only rose slightly from a near-zero baseline earlier this year along with other groups. 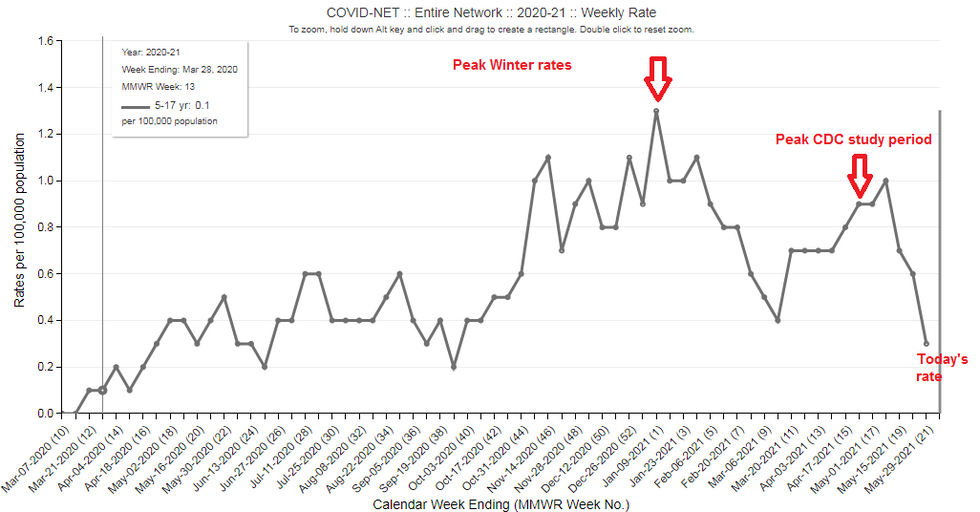 This is the same thing the CDC and others did when they picked arbitrary start and end points last year showing a decline in cases after mask mandates were instituted, while ignoring the massive subsequent increase over the winter in these same places.


But here’s the kicker: Hospital rates among children actually increased more slowly during the early spring spread than among those over 65, which is the most vaccinated demographic.

So, there is no way to chalk up that superficial increase with an arbitrary start and end point to lack of vaccination. It’s merely a reflection of a time when cases went up mildly in a minority of the country (while plummeting in the South and West). Whatever tiny baseline of hospitalizations there are among children went up commensurately with the baseline increase during any other period of spread. Of course, today, hospitalizations are lower than ever. There is zero evidence that vaccination rates played any role in that trend.


Finally, numerous studies, including the CDC’s own data, show that there is a much higher rate of fake COVID hospitalizations among children than adults, aka when there is no proof they were hospitalized because of COVID. According to this very report from Friday, 46% of those reputed teen hospitalizations were “not clearly COVID-19 related.”

What’s worse, almost half of those teens in the observational study where the cause was unclear appear to have been admitted for psychiatric reasons!

In other words, it’s likely the depression induced by the very panic the CDC is trying to exacerbate among kids that has engendered a decline in mental health leading to hospitalization, not the virus itself.


According to the U.K. Daily Mail, a recent U.K. survey of humanitarian organizations found that “more than a quarter of 75 charities surveyed said some children had expressed suicidal thoughts, while 41 per cent said some had been abused at home in lockdown.” In the U.S., the CDC reports 1,139 deaths from COVID under the age of 25, but concedes that 30% of those deaths included could not plausibly be linked to the virus. At the same time, there were over 2,500 non-COVID excess deaths for that age cohort, meaning that the panic, hysteria, drug overdoses, and suicides likely killed 3.5 times as many teens and young adults as the virus.

It doesn’t take a forensic investigator to realize that there has been a plethora of teenagers in the hospital due to the lies overstating the threat of the virus to them. Naturally, at a time when COVID is increasing in all age groups, a certain percentage of those youngsters will test positive for the virus. Accordingly, any subsequent death of any teen who tested positive – whether he or she died from drugs or suicide – will be recorded as a COVID death.


In May, New York magazine published a story highlighting new studies showing that the pediatric hospitalization numbers for COVID have likely been dramatically inflated throughout the country. The first study, published in the official journal of the American Academy of Pediatrics, was conducted by Stanford researchers and examined 117 reputed COVID hospitalizations among those under 18 at a children’s hospital in Northern California. They found that just 7.7% exhibited severe illness and 12.8% critical illness. Overall, 45% were classified as “unlikely to be caused by SARSCoV2,” and it appears that most of the others weren’t suffering life-threatening illness.


The twisted irony is that the CDC is lying about COVID hospitalization trends in order to get children to vaccinate when, in fact, vaccine-related hospitalization are really on the rise today. Dr. Monica Gandhi, an infectious disease specialist at UCSF, tallied the data from just one reported serious side effect listed in the Vaccine Adverse Events Reporting System (VAERS), myocarditis, and found that hospitalization for myocarditis post-vaccination among 12-17-year-olds is currently 12 times greater than hospitalization for COVID. Why do our “public health experts” not find that current trend alarming?

It’s quite evident that the pandemic in America is over with and it never affected children, even during its peak. However, the pandemic of lies, fear, panic, and emotional abuse is continuing indefinitely until Pfizer and Moderna satiate their rapacious appetite for children’s blood. Who will defend our children?

'Vaccines Are Safe And Effective'.
Ya, just like the "laptop" was russian disinformation.
Just like a utube video caused the attack on the US embassy.
Just like when Bill said "I didn't have sex with that woman."
Just like "there are weapons of mass destruction in Iraq."
Just like "i did't inhale".

"According to a recent headline from The New York Times, “the CDC isn’t publishing large portions of the COVID data it collects.” That headline downplays what the article in fact reveals:

Two full years into the pandemic, the agency leading the country’s response to the public health emergency has published only a tiny fraction of the data it has collected, several people familiar with the data said.

The article says when the Centers for Disease Control “published the first significant data on the effectiveness of boosters in adults younger than 65…it left out the numbers for a huge portion of that population: 18- to 49-year-olds, the group least likely to benefit from extra shots.”

“The agency has been reluctant to make those figures public,” according to the Times, “because they might be misinterpreted as the vaccines being ineffective.”"

Certification Of Vaccination ID and Epstein didn't kill himself.

YOU are defending them!