Ever since it burst out of Wuhan, China roughly one year ago, the coronavirus has created what one economist described as a “trilemma” – that is, the struggle to balance the inevitable tradeoffs between safeguarding public health, the economy and personal freedom.

In the US (and in many spots around Europe as well), some have pointed to skepticism surrounding the accelerated development process for the myriad COVID vaccine projects as a potential obstacle to achieving herd immunity, since a lack of public confidence might force some governments to try and unduly pressure citizens to accept the vaccine.

With all this in mind, policymakers and economists are struggling to pinpoint an acceptable trade-off between public health, economic health and personal freedom. Some analysts have taken to calling these conflicting priorities the coronavirus “trilemma”. However these conflicts are resolved will be critical to the economic outlook in 2021, and with Wall Street increasingly expecting the US economy to slide back into contraction during Q4, speculation about the timing and pace of the rebound has been pushed out to next year, and 2022.

To be sure, the timing of the COVID-19 vaccine rollout will be critical in deciding how all of this plays out. But there’s another issue, more closely related to the “personal freedom” leg of the “trilemma”, that epidemiologists and policymakers may have underestimated. And that’s the question of public confidence in the vaccine.

Several Wall Street research shops have published insights on the subject, using data gleaned from YouGov and Gallup opinion polls, along with other sources. The other day, Deutsche Bank published a chart breaking down eagerness to receive the vaccine, along with opinions about whether it should be “mandatory”.

Opinion polling is clear: In the US, more than 2/3rds of the population feels receiving a COVID-19 vaccine should be voluntary. What’s more, only a small percentage of Americans would push to be vaccinated within the first month of a vaccine being widely available. Most appear content to hang back, presumably more concerned about when the economy will be allowed to reopen than when they might be able to get vaccinated.

Of course, opinions could shift substantially if something unexpected happens between now and when the FDA is due to begin reviewing the Pfizer (and, eventually, Moderna) applications for emergency-use approval. As Bloomberg’s John Authers reminds us, it’s not a done deal.

It’s also conceivable that something goes wrong with vaccine safety or the manufacturing process. Most precariously, there is what is known as “vaccine-hesitancy.” Across the world, many are reluctant to take one. These are the results of surveys conducted in the U.S. and western Europe for Deutsche Bank AG. They suggest that politicians may be forced to make vaccinations mandatory, which could make the politics of 2021 very dangerous:

Authers shared another chart from DB showing that attitudes about vaccines across Europe are mostly the same as in the US, with the UK seeing generally higher acceptance of vaccines (perhaps there might be a correlation between acceptance and levels of public hysteria driven by notably higher mortality rates?). 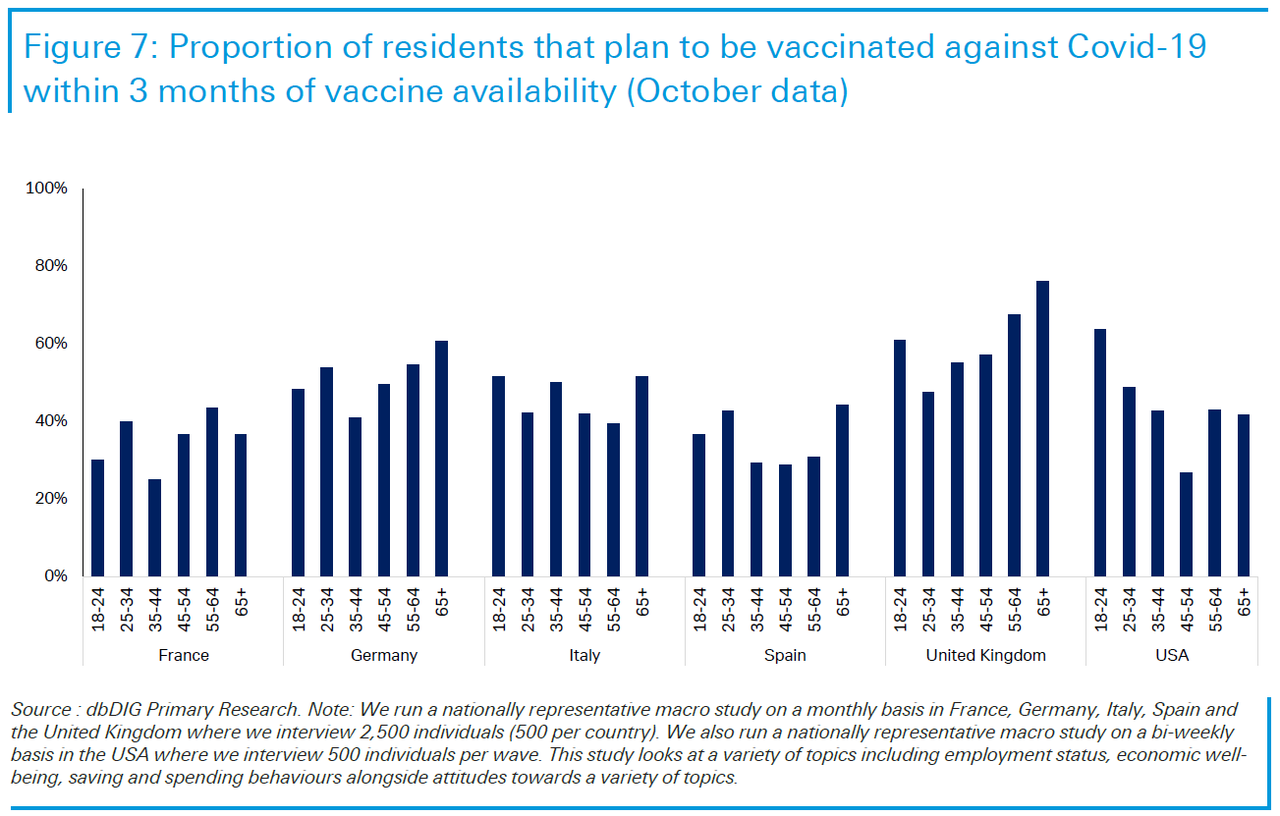 Over the past week, Dr. Fauci has upped the rhetoric about vaccine skeptics, labeling them as a “serious threat” to public health, while millions of Americans prepare to ignore the CDC’s guidelines and travel to see family and friends despite the situation.  Could it be that, nearly a year into the worst pandemic in a century, the public’s attitudes about the threat posed by COVID-19 are notably more lax than Dr. Fauci’s?