The review of a cluster of Covid-19 cases in Nebraska came as the variant spreads in the U.S.

The Centers for Disease Control and Prevention added to research suggesting the Omicron variant can lead to reinfections that are often accompanied by mild Covid-19 symptoms, as new cases soared across the U.S.

States reported 512,553 cases on Monday—the most for a single day since the start of the pandemic—as states caught up after pausing for the Christmas holiday, according to a Wall Street Journal analysis of data from Johns Hopkins University. The tally lifted the seven-day average of reported cases to 237,061, 15,000 less than the pandemic high recorded about a year ago.

The report for Monday didn’t include North Carolina, South Carolina and Rhode Island, which remained on pause. [CDC never manages to collect all the data.  Great excuse to blame the data whenever they get things wrong.–Nass]

That gap and more blackouts in reporting during the New Year weekend are expected to muddy the tracking of the full extent of the pandemic’s trajectory until January, when reporting catches up.

Covid-19 testing was also less prevalent earlier in the pandemic, complicating case-rate comparisons from one surge to another. As with earlier variants, tracking Omicron’s spread in the U.S. has been a challenge for public-health officials. The CDC on Tuesday estimated that Omicron was responsible for 59% of new infections for the week through Dec. 25 and 23% for the week through Dec. 18. Last week, the CDC had estimated Omicron drove some 73% of infections in the week through Dec. 18. The CDC said Tuesday that the latest figures fell within the bounds of its statistical model and that the trend of Omicron’s increasing prevalence among U.S. cases is clear.

The CDC on Tuesday also released a review of a cluster of recent Covid-19 cases in a family of six in Nebraska. The cases indicate that Omicron is able to infect people who have had past infections, and that it causes milder symptoms in some people with some immunity, either from a vaccine or past infection. Also, Omicron seems to bring about symptoms sooner—in about three days following exposure, rather than five or later, the agency said.

The first suspected case in the cluster was a 48-year-old man who returned from Nigeria on Nov. 23 and showed Covid-19-like symptoms a day later. By Dec. 1, all six family members had positive SARS-CoV-2 PCR tests, and sequencing confirmed the Omicron variant in each case. Five members of the family, including the only person who is fully vaccinated, had confirmed infections about a year ago. They each experienced symptoms similar to or more mild than those during their past infection. The one unvaccinated family member who didn’t have a confirmed infection had cough, joint pain, congestion, fever and chills. No one in the family was hospitalized, the CDC said. 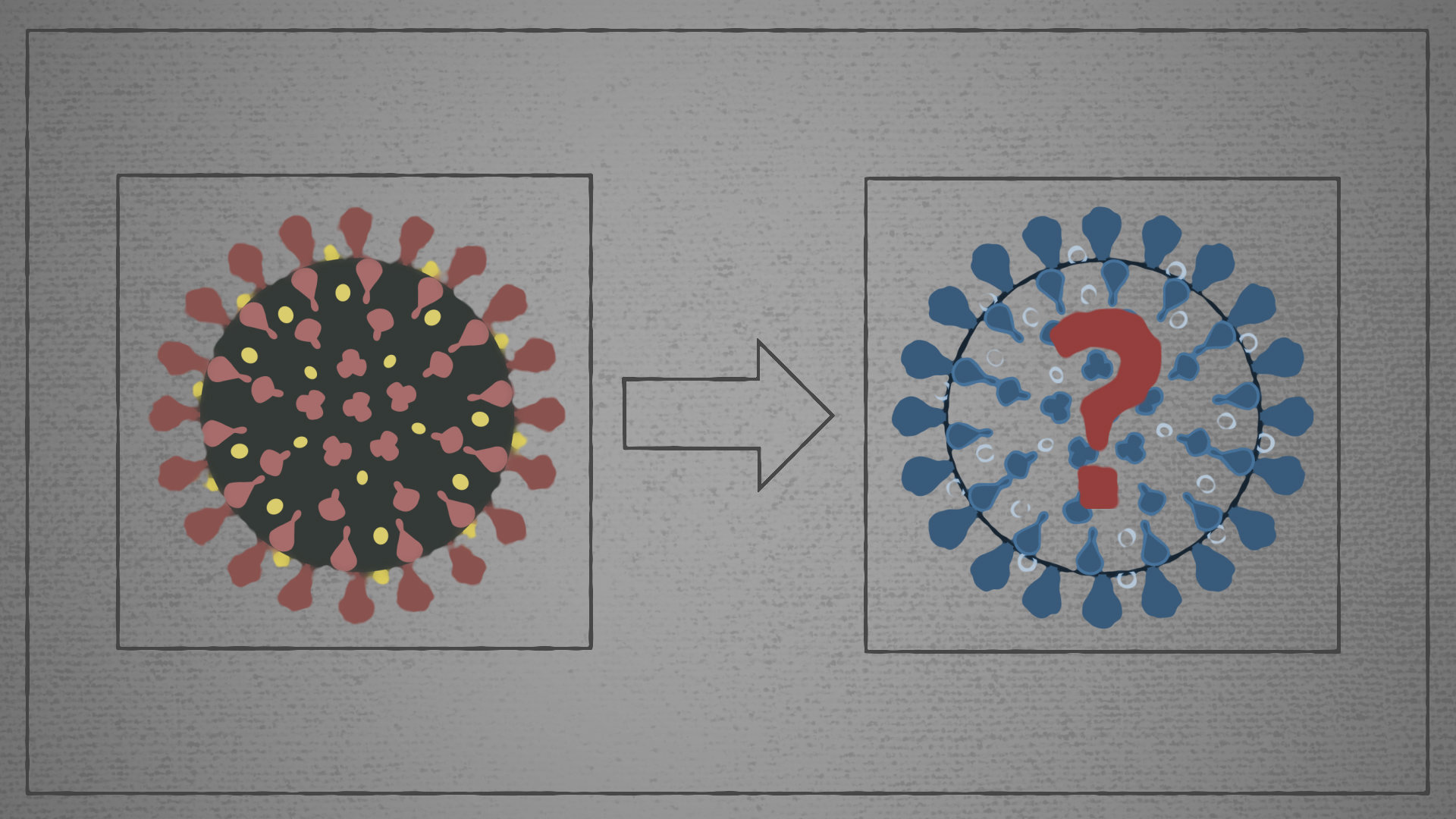 What’s After Omicron? How Scientists Hunt for New Coronavirus Variants

Scientists are using automation, real-time analysis and pooling data from around the world to rapidly identify and understand new coronavirus variants before the next one spreads widely. Photo Illustration: Sharon Shi

The CDC on Monday reduced the recommended isolation period for people infected with Covid-19 to five days from 10. The new guidance reflects growing evidence that people with the virus are most infectious one to two days before the onset of symptoms and two to three days afterward, the agency said, as well as concern over the disruption staff outages are causing in the travel and healthcare sectors.

The CDC now says that infected people who are asymptomatic can leave isolation after five days and should wear masks when around other people for another five, while those vaccinated and exposed to someone with Covid-19 should wear a mask for 10 days and try to get tested five days after exposure.

The CDC should have included a requirement that people test negative with rapid tests before ending isolation, said Angela Rasmussen, a virologist at the Vaccine and Infectious Disease Organization at the University of Saskatchewan. “Test-to-release using rapid testing is sensible and would really reduce the likelihood of someone who is still contagious potentially transmitting the virus to others,” she said.

If the CDC’s new guidelines are adopted, they could enable people to return to work more quickly and avoid snarling key industries. Thousands of flights were canceled over the Christmas weekend, while officials in the U.S. and elsewhere have expressed concern over how quarantines are affecting hospital staffing levels.

The Food and Drug Administration said Tuesday that some antigen tests, the basis of many at-home rapid tests, are able to detect the Omicron variant but “may have reduced sensitivity” to it. The data come from a collaboration between the FDA and the National Institutes of Health’s RADx program to assess how successfully antigen tests detect Omicron in samples from infected patients. Antigen tests are known to sometimes yield false negative results.

New York City will send children back to public schools on Monday while ramping up testing capacity and making it easier for children who are exposed to stay in school, the mayor, the governor and incoming Mayor Eric Adams said Tuesday.

The city and state are going to provide some three million rapid test kits that will be distributed to students and staff who are in a classroom with a positive case. Students who test negative and are asymptomatic will be able to remain in school. Officials said they plan to double the amount of regular testing of students in schools to track potential outbreaks and expand eligibility to include vaccinated students as well as staff.

Research carried out in South Africa and the U.K. suggests that Omicron, while more transmissible, causes a milder form of the disease among vaccinated people than previous strains, such as Delta. A new study from the South African lab that has been at the forefront of research into Omicron suggests that infection with the new variant provides protection against Delta.

Scientists at the Africa Health Research Institute looked at 15 vaccinated and unvaccinated people who had been infected with Omicron. When they tested their blood samples against the Delta variant, they found a more than fourfold increase in antibodies against the virus over a two-week period.

Those who had been vaccinated produced a stronger response against Delta, according to the study, which hasn’t been peer reviewed.

“If Omicron does prove to be less pathogenic, then this may show that the course of the pandemic has shifted—Omicron will take over, at least for now, and we may have less disruption of our lives,” said Alex Sigal, who led the study.

The researchers cautioned that prior infection from other variants and vaccination might have contributed to the increased protection from Delta rather than the Omicron infection alone, spurring an increase in antibodies against Delta.

Omicron Origin: How Is This Not Being Discussed?
First known Omicron cases discovered in Botswana were found in “foreign nationals on a diplomatic mission.”

'HUGE. CDC Withdraws Use of PCR Test for COVID and Finally Admits the Test Can Not Differentiate Between the Flu and COVID Virus'!

So it appears, that using an INVALID lab test, millions of people around the world have been frightened into taking an Experimental Use Only "gene-editing procedure", that has damaged their immune system and has resulted in millions of deaths around the world. And now, these people are effectively being told its "boosters forever" to keep them alive. The reality is boosters are not the real answer.

Dr. Nass, its time for some articles describing how people can provide for their "stolen" immunity, with vitamins, and other products that can remove the graphene from their systems. Please help.

The lab alert was issued July 2021 and was only for the CDC test. Other PCR tests were developed in the first months of the pandemic. The question would be how many labs and clinics used the CDC’s test and how many cases of influenza were misdiagnosed with COVID. Doesn’t say much for the CDC, though, does it.