Sam Jacobs asked me to post his article about the transformation of local police departments into a militarized force with a frightening array of equipment. Because this is something we can begin to address at the local level, to prevent police abuses and derail the transformation of police into an army deployed against citizens, I agreed to excerpt from his article and post the highlights.You can goherefor the full article.

… The Second Wave of Militarized Police 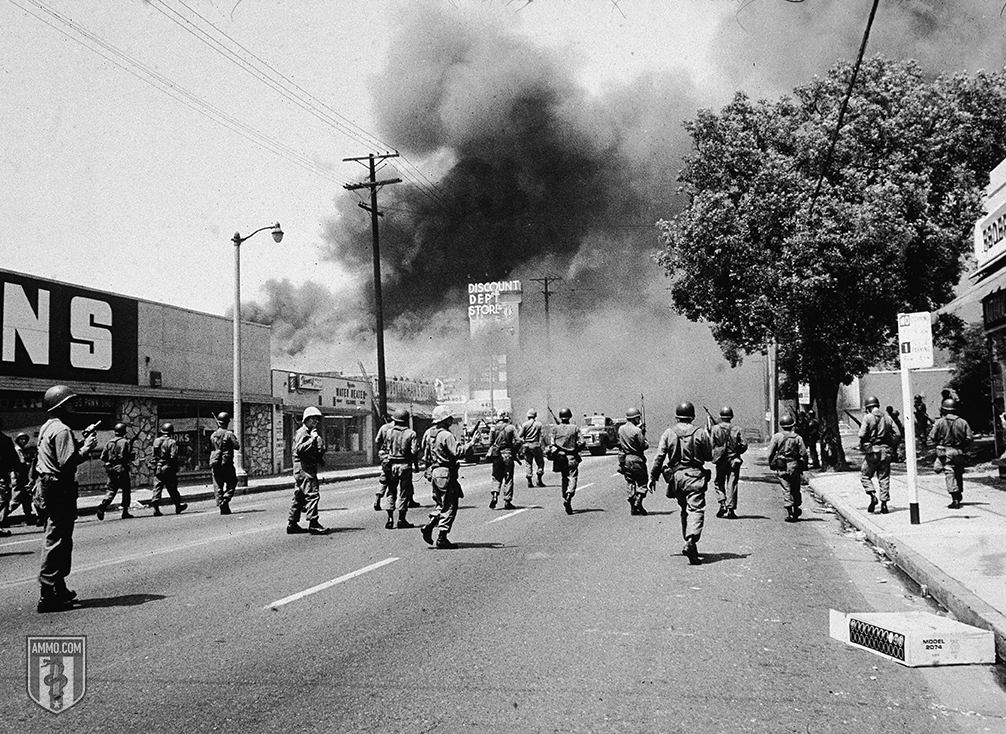 The second wave of police militarization begins with the race riots in the 1950s and 1960s, with the Watts Riots in 1965 gaining a sort of gravitas. The LAPD used military-style weapons and tactics to end the riots. What’s more, an increasingly militant civil rights movement was seen by the CIA as an arm of international Communism. While there is some merit to this view, it’s certainly true that it led to a philosophy of increasingly militarized police.


The militarization of police is not by any means based on manufactured and artificial paranoia. Even in the case of Prohibition, it’s a simple fact that organized crime used weapons with firepower far in excess of what the police had access to. Similarly, the second wave of militarized police was partly in response to an increasingly militarized organized crime thanks in part to the beginnings of the War on Drugs.


On one hand, the police were encountering more and more dangerous organized crime syndicates, such as the Medellin Cartel and street gangs like the Gangster Disciples. Urban unrest included not just race riots like the aforementioned Watts Riots and the 1967 riots in Detroit, but also the riot outside of the 1968 Democratic Party Convention. Domestic terrorist organizations like the Weather Underground, the Symbionese Liberation Army, and the Earth Liberation Front likewise offered increased challenges to law enforcement.


Unrelated to the War on Drugs, the 1986 FBI Miami shootout was a game-changer for law enforcement budgets. Police outnumbered suspects by a factor of four. Despite this, they were pinned down by suppressive gunfire. The incident lasted five minutes and 145 rounds were fired. The suspects were hit multiple times, but continued to fight in part because the officers’ and agents’ service revolvers did not have sufficient stopping power. In response, there was a movement to increase the firepower of service revolvers. This is when semi-automatic pistols began to replace the revolver and larger magazines became the rule. Rifles, shotguns, and heavier body armor also saw increased adoption after this shootout.


Another incident accelerating the militarization of police is the North Hollywood shootout of 1997. This bank robbery left two dead (the perps) and 20 wounded – 12 police officers and eight civilians. It lasted 44 minutes, an eternity in terms of police shootouts, with approximately 2,000 rounds fired. The perps got off approximately twice as many rounds as the police officers on the scene, but the game-changer was the arrival of the SWAT team, who had much more appropriate weaponry. This led to everyday police officers getting equipment that was customary for SWAT teams in the 1990s.


We again arrive at a place to examine this topic with some nuance: Current organized crime presents a threat to public safety, as well as police officers – who should be equipped with the necessary tools to combat this threat and maintain public order. However, it’s not clear that small towns are in need of SWAT units, nor that any city needs a tank. What’s more, there has been a massive expansion of SWAT team use that seems inappropriate.


One can certainly be critical of the desire of every police department to have every tool under the sun – and to use them with gusto – without having to demand stripping the police of very necessary tools required to combat what are effectively small paramilitary organizations. A lack of perfection in urban policing is not an argument for no policing whatsoever, it is an argument for greater oversight and civilian diligence. 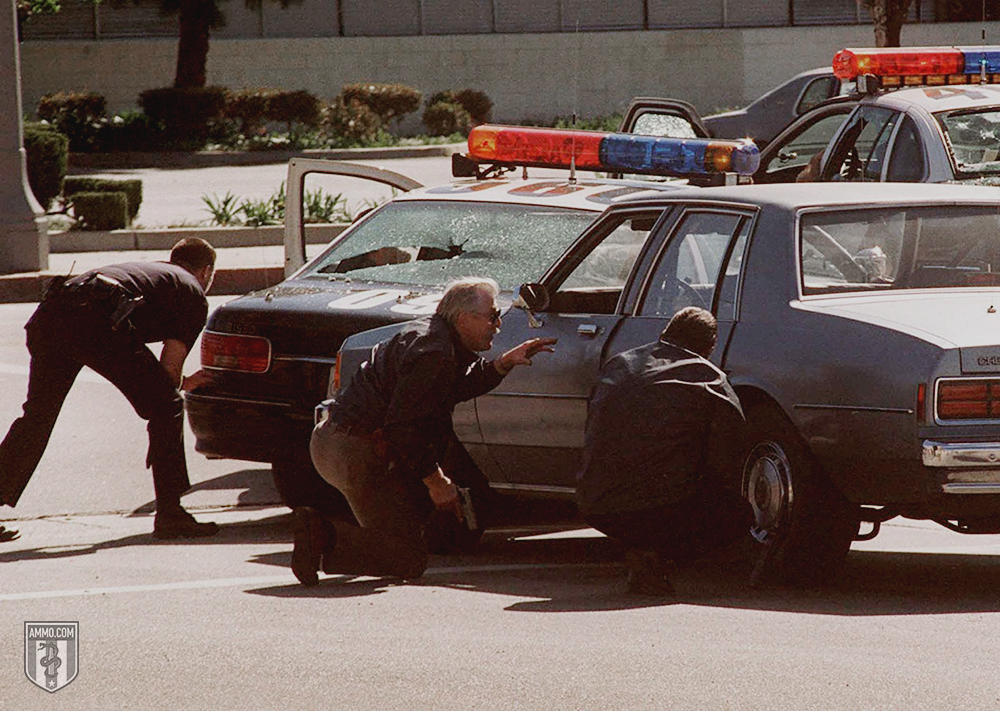 The 1033 Program was enacted in the wake of the 1997 North Hollywood shootout. Created by the National Defense Authorization Act for Fiscal Year 1997, it allowed law enforcement agencies to get their hands on military hardware.

Unsurprisingly, the preference was given to law enforcement engaged in anti-drug and counter-terror activity, underscoring the vital role of wars on abstract concepts in increasing the militarization of the police force. Bill Clinton – he of the massacres at Waco and Ruby Ridge – signed the bill into law.
$5.1 billion in material was transferred from the Department of Defense to local law enforcement between 1997 and 2014, with ammunition being the most common requisition. 8,000 law enforcement offices participate as of 2014.


The program has come under bipartisan criticism lead by Rand Paul. Senator Paul stated that the program has “incentivized the militarization of local police precincts and helped municipal governments build what are essentially small armies.” Senator Claire McCaskill led the first investigation of the program starting in September 2014. At least one study found a correlation between the 1033 program and increased fatalities at the hands of law enforcement.


One of the big game-changers for militarization of police was the 9/11 attacks. This greatly eroded the Fourth Amendment protections against unlawful search and seizure. Now police – local, state and federal – need to suspect “terrorism.” This provides the same convenient cover for police overreach that was previously offered by the War on Drugs.


President Obama gave new directives for the 1033 program that forbade police from acquiring certain weapons from the military. These include weaponized vehicles, grenade launchers and bayonets. Attorney General Jeff Sessions ended these restrictions upon assuming office in 2017.


The weapons that come to local police departments through the 1033 pipeline are direct from the military and, by extension, the War on Terror.


Training with military units is also increasingly common according to a report from the Cato Institute. The training generally takes place not with regular infantry units, but with specialized and elite groupingswithin the United States military who are more familiar with guerilla uprisings – such as the Navy SEALs and the Army Rangers.

The Role of Civil Asset Forfeiture 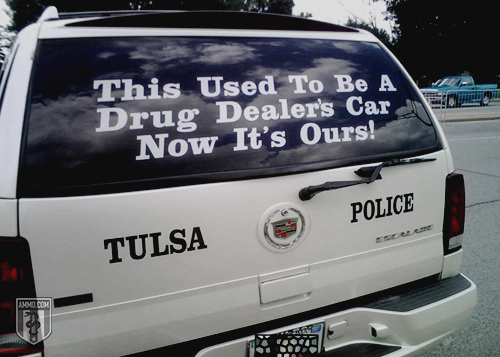 Civil asset forfeiture (CAF) is a major driver in the militarization of the police force. Put simply, CAF is a legal principle that allows police to seize money and property from “suspected” criminals, which they can do without a warrant because the suspect’s property doesn’t have the presumption of innocence. Note that police do not have to convict or even indict. Indeed, indictments are not even filed in over 80 percent of all cases. Police can simply seize property, more or less at will, with some property harder to seize than others. Seizure of anything under $20,000 will almost certainly stand because that’s about what it’s going to cost you to fight CAF in court.

Most of the money raised through civil asset forfeiture is filed under “other.” This can be anything from a $600 coffee maker to a tank. Because the burden of proof is so low and the benefits are so high, CAF is effectively a legally allowed form of theft by police officers, allowing them to purchase military-grade hardware with stolen property. Here is a short list of military hardware purchased with civil asset forfeiture funds:

While not the sole, nor even the primary, means by which the police are becoming militarized, this is a significant method for police departments to bankroll their own militarization…